With Docker, and containers in general, becoming more and more prevalent I’m finding there’s no longer a compelling reason to install command line utilities anymore. Instead, I now look for docker images containing a CLI utility I want to use, and I simply pull that image locally and run a container for it instead.

Why? A few reasons spring to mind. The first is the isolation that a container provides, giving me confidence that I’m limiting my exposure a utility that misbehaves. The other is the ability to always run the latest version without worrying about locally upgrading, and having the flexibility to run older versions side by side with the latest if I so choose.

As an extra bonus, it also means I am effectively able to commit the specific CLI utilities I need for a project into source control without needing to commit any binaries, or worry about developers all having the same versions of a utility installed.

Of course, there’s tradeoffs to this approach. Invoking CLI utilities via a docker run command is not as easy, and there’s a very minor overhead in spinning up a container just to run a utility, but I view these as minor hindrances for the benefits gained.

For example I wrote a post last year on using Jekyll on the Windows Subsystem for Linux (WSL), which I use to check my blog locally before pushing it to GitHub Pages. And now? Well, I now use a docker image for GitHub Pages and spin up a container instead:

To make it easier, I’ve put that command in a .cmd script file and checked it into git so I have it available no matter what machine I’m editing my blog on.

What about a JavaScript build environment?

Another thing I’ve wanted to do for a while is eliminate the local installs of node, npm and yarn. I really don’t like the hassle of checking if I have the right versions of node each time I want to work on a project. It would be so much easier to just pull the latest docker image for node/npm/yarn and execute commands on a container instead.

And now I can! No more local node installs! I just use the node:alpine container image from the docker store with some local command scripts to save typing out the docker run commands. Here’s one for running yarn, as an example:

I created simple variations of the script for running node and npm as well, and put all scripts in the root of my source tree (and checked them into source control) 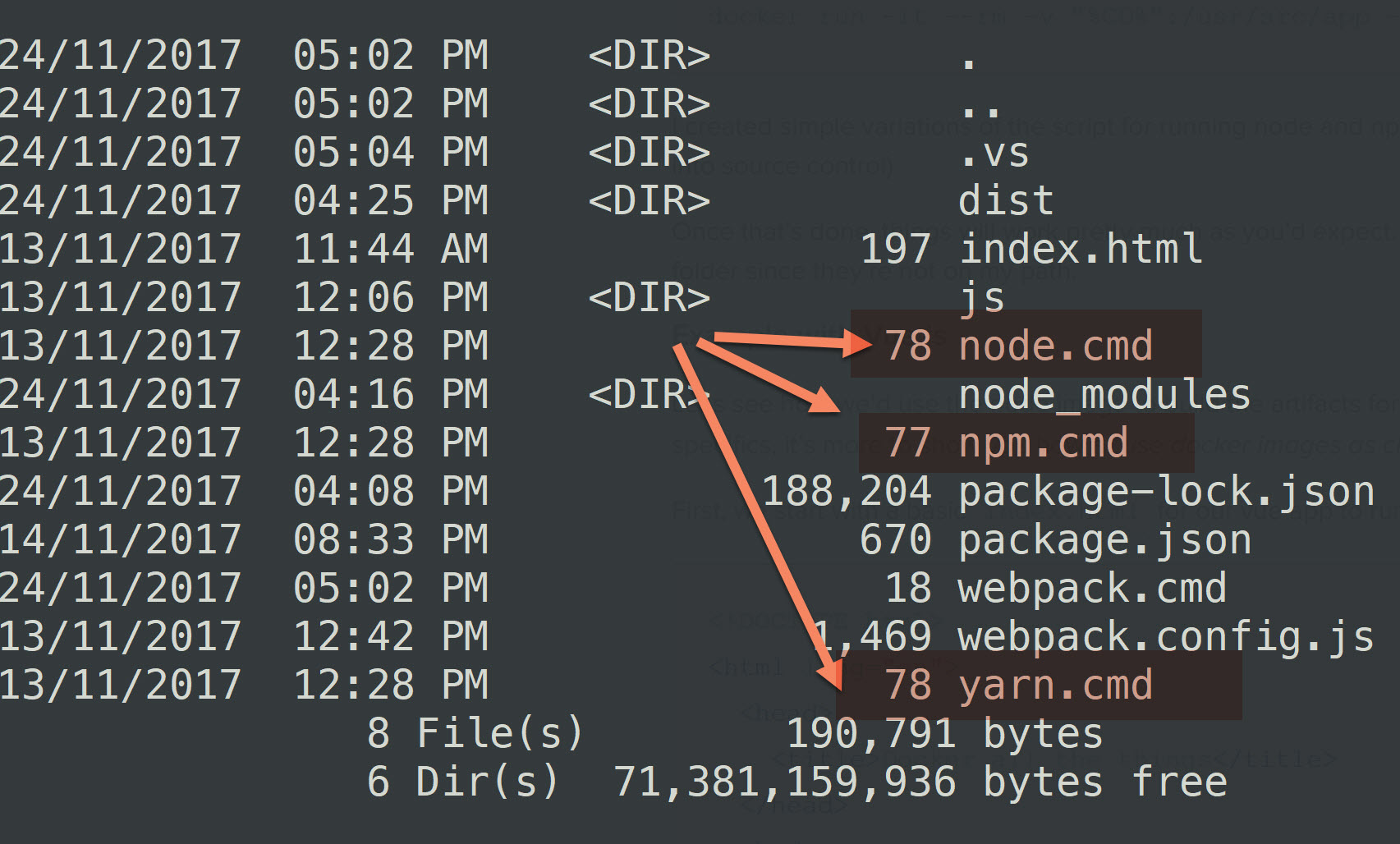 Once that’s done, things will work pretty much as you’d expect. I just need to make sure I’m executing my commands from the appropriate folder since they’re not on my path.

Let’s see how we’d use the node image to build the artifacts for a (very) small Vue.js app using webpack. Don’t worry too much about the vue specifics, it’s more to show you how a “use docker images as cli tools” approach works:

First, we start with a basic index.html for our vue app to run in:

Then we add a ./js folder for our source and create an app.vue file in it.

The we add a main.js file where we’ll have our vue entry point.

OK. Basics in place. Now I want to use webpack to process the app.vue template, run babel.js over the js files, bundle all of it together into a single distributable file, minify the result, produce a source map for debugging and place the output in a ./dist folder. I won’t put the webpack.config.js file in here as it would make the post a little long, and webpack configuration is too much of a sidetrack given we’re talking about docker containers.

Regardless of our configuration, when using webpack the normal approach is to install it as a globally avaiable command using

But a global install doesn’t really make sense, especially since I no longer have node installed, and since the container will get destroyed as soon as the command completes.

I want to do a local install instead.

And in my package.json file I add a line to the scripts section so I can call it using npm run.

When I want to execute webpack I can now do one of two things. I could call npm run webpack from the command line or create a webpack.cmd file as follows

and just run webpack from the CLI like I normally would.

Creating a cmd file just to wrap the npm run command may feel like overkill, but a number of code editors that have the ability to call webpack assume it is available as a command. The cmd file helps in those situations. For me, it’s when I use Visual Studio’s Web Essentials Task Runner.

The only downside of this approach is that the file watcher in the container doesn’t detect changes, so I need to manually trigger the rebuild rather than letting the file watcher kick things off for me. It’s a minor annoyance and not a big deal for me, personally, but you might not like it.

Technical aside: The file system watcher should work once the new Linux Containers on Windows (LCOW) feature matures a bit more. It’s currently an experimental feature in Docker for Windows and at the time of writing there’s a bug with permissions/chmod in LinuxKit that stops npm installing dependencies properly, blocking me from making it work.

Long story, short? I’ll continue to look for ways to run command line utilities via containers, especially as the more complex use cases like a javascript build chain are achievable with minimal effort.