Within Readify we have a number of different teams working with our customers in a mix of on site and off site arrangements. Regardless of the physical arrangement, a primary element of any engagement is establishing mechanisms for fast, rapid, ad-hoc communication with our key stakeholders. Ideally this is largely built around face to face communication, but the practicalities of people’s availability and/or distance often mean that this form of communication in itself isn’t enough and we supplement this with other communication channels.

In fact in any team there’s a need multiple channels of communication. Face to face is great and email is a nice back up, but they aren’t enough, and let’s face it, anything we can do to reduce our inbox clutter is a good thing! One of those channels is a team based communication room – a digital equivalent of then team room, where the team can shut the virtual door and talk amongst themselves about the work they’re doing and how they’re doing it.

A number of companies have seen this need and built tools for ad-hoc, chat room style communication, with HipChat and Campfire being two well known products the provide this. Within Readify we have generally leaned on HipChat to complement our use of TFS for team development and have found it to be an excellent tool to use and it has met our needs well. Experience across a number of teams and projects has shown us that those teams using HipChat actively, even when co-located, are more aware of what others in the team are doing, better understand their impact on others in the team, have a better sense of “team comes first” and are collectively more engaged with the work they’re doing than teams that rely only on email and face to face communications.

As you may know, just announced at TechEd North America today (June 2013) is a new feature in TFS known as Team Rooms that meets this communication need. It’s available on the Team Foundation Service right now in beta form and is coming in the next version of Team Foundation Server, due before the end of the year. Just like HipChat and Campfire, it aims to support teams by enriching and expanding the way teams communicate. It also goes beyond just a chat channel by allowing events from TFS to be published to the room as well.

I’ve been using Team Rooms with one of my teams for a while now and it works, and works well, even though it’s still early days. 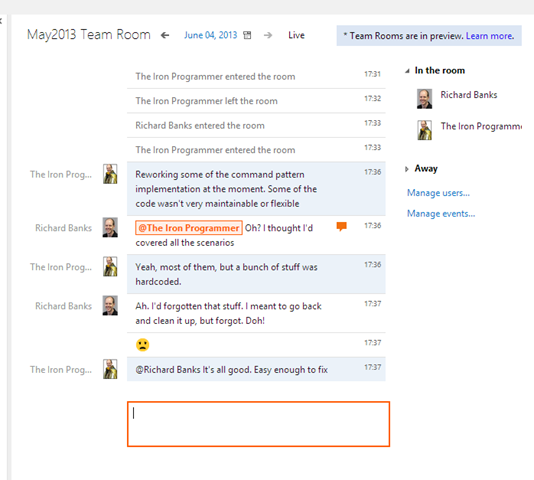 On the surface it looks much as you would expect, with support for @name addressing of team members. People enter and leave the room, and you can bring in other people to the channel via the Manage Users link on the right (if you have the right permissions).

For those familiar with Hubot you’d be aware that it can post things to a chat room and respond to various messages as well using an array of scripts that you can write. The TFS Team Room can’t do that Hubot sort of thing at the moment but you can hook up TFS events to appear in the room so that everyone knows who just broke the build for example and can get their coffee orders in quickly!

If you connect to the Team Room using an account with the appropriate permissions you’ll see a link for “Manage Events” on the right of the chat window. Click that link and configure the events you’re interested in: 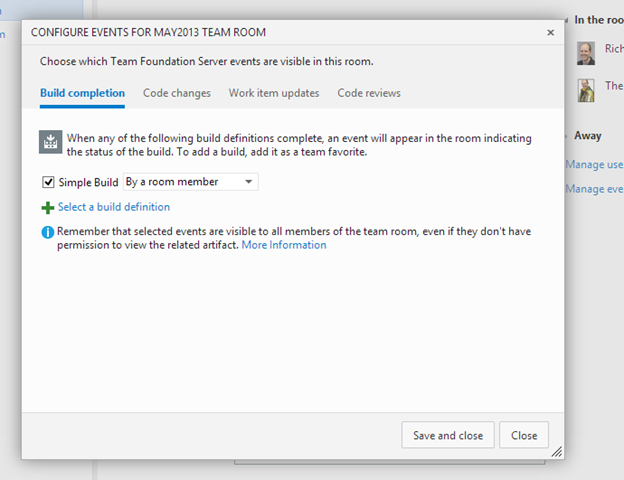 Now what will happen is that as you do your normal work you’ll see various alerts from TFS appearing in the Team Room. This is really useful in that it reduces inbox clutter and helps make the Team Room stickier, i.e. something that the team stays actively involved in.

For example. here we see some events being triggered and shown in the team room. 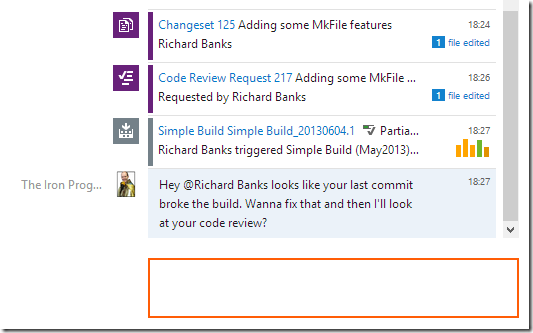 Immediately we can have a conversation about the broken build, and it’s visible to the whole team in a passive manner. It’s better than shouting this out across the room or trying to communicate this via email, etc.  The Team Room adds that extra dimension to your team communication that can help you and your team to work together collaboratively to produce great software.

The Team Room also remembers what’s been posted to it so that if you’re away from the room for a while you can jump back in and quickly catch up on what’s been happening, avoiding that awkward “what on earth are you all talking about?” moment.

If you’ve got a TF Service account already the Team Room feature should be active on your account right now. If you don’t have one then go sign up for one at http://tfs.visualstudio.com. Try them our for yourself and, as a tip, do it with a real team so you can get a genuine feel for how they can help improve how your teams communicate.  Good luck!

P.S. If the alert sound for new messages starts to bother you there’s a little speaker icon in the top right of the window you can click to mute the sounds.