Windows Workflow Foundation (WF) is a great technology for adding workflow functionality to any .NET application and it includes within it a very useful forward chaining rules engine. Because the rules engine is part of WF there is an unfortunate presumption that in order to use the rules you need to be running a workflow; but who wants to do that just to run a few rules across their objects? Especially when instantiating a workflow requires quite a bit of work or using a workflow just doesn't make sense.
Well, as it turns out you can use the workflow rules engine on it's own without any workflows at all. Because the windows workflow foundation architecture is very loosely coupled the workflow rules engine is effectively a standalone component that workflows call out to when they have rules to evaluate. We can take advantage of this from our own .NET applications and call the rules engine whenever we want a set of rules evaluated against one of our objects.
Why would we even want to do this?
O.K. so if you're still with me then you're probably wanting to know how it all works.

To start with, we need some way to enter rules and somewhere to store them. And, like all good developers, we don't want to reinvent the wheel. Go to the MSDN web site; specifically the rules engine code sample and once there download and install the ExternalRuleSetDemo sample.
The demo shows you how to create and edit sets of rules and store them in a database. Normally the rules editor is only available from within Visual Studio as part of the workflow editor but the ExternalRuleSetDemo shows how you can host the RuleSet Editor in a standard windows application and provide a backing store for the rules using an SqlExpress database.
The solution in the sample kit contains 4 projects but you really only need to look at the ExternalRuleSetLibrary project and the RuleSetTool project.
By the way, you don't have to use SqlExpress as the backing store. It's a fairly trivial process to switch it to another provider. Just go to the SaveToDB() and GetRuleSets() methods in RuleSetEditor.cs and change the code. For fun, I switched to an SqlCe Database with very little effort.
Once you've compiled the application, run it and you should see something like this (but without any Rule Sets) 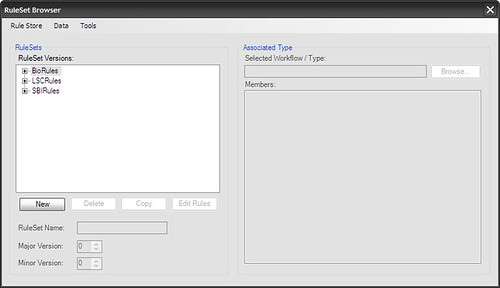 To create a rule set, click the New button. A new ruleset will be created with some default information. You can then indicate what class to base your rules on by clicking the browse button, locating the assembly that contains the class and clicking OK.
Next you can click the Edit Rules button to start the standard WF rules editor window as shown here: 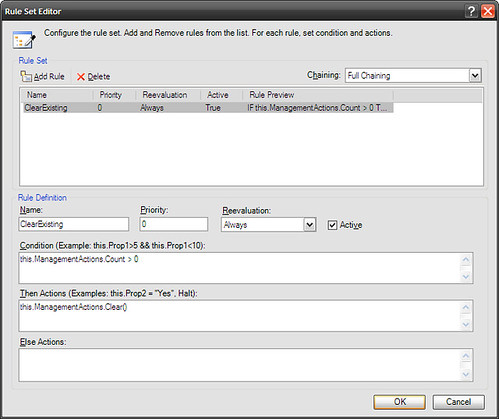 Ok, so now we have a way to create and edit rules. That's great, but pretty much useless unless we have an application in which to use those rules.
Thankfully, the task of talking to the rules engine is actually fairly simple. What we need to do is create a helper class that will:
And then we'll use that helper class to run the rules for our business object.
If you go to the samples site again you can download the RulesDrivenUI sample and have a look at the code in there. It's the basis for what's shown here.
Now, lets load up the rule set. We'll pass in a string containing the name of the rule set we want to load and then load it up from the database.

The WorkflowMarkupSerializer is used to deserialise the XML based workflow that we stored in the database (in step 1). P.S. These methods exist in a helper class, and the ruleSet variable is a private field of the RuleSet type.

GetRuleSetFromDB is shown below and once again it's pretty simple. The code show here uses the SqlCe database provider, just to prove it can be done. You can, of course, use any database mechanism you like.

Note the call to DeserializeRuleSet() [in bold]. This is where the ruleset we retrieved from the database is converted from XML back to a ruleset object. It basically wraps a call to the WorkflowMarkupSerializer as shown:

Cool! So now we've got the rules loaded up from the database.

At this point we'd love to be able to just point the rules at an object of our choice and run them, but before we do, we have to check that the rules are still valid. Why? Because when we deserialised the rules from the database we had no guarantee that those rules were still valid for the object we are going to run them against. Method signatures may have changed, properties may have been removed or we may have loaded up rules created for a completely different class. By validating the rules we protect ourselves from (most) run time errors.

There are 2 important things happening here. Firstly we are validating the rules by passing in the type of the object we are going to run them against and checking if there are any errors. Then secondly we are creating an instance of the RuleExecution class. This is needed to store the state information used by the rule engine when validating rules. Note that while we are passing in the validated rules and the object we want to execute the rules on at this point we have not yet executed the rules, we have just created the context in which they will run.

So now we come to it. Finally! It's a really simple call to the RuleSet Execute method:

We can now wrap all these methods up into a simple method as follows:


Now to run rules for our class all we need to do is make two simple calls. Assuming we have put the above code in a helper class then we can do something like this:

Now all we need to run rules in our classes is these few lines of code.

Pretty cool, hey? If you've got any comments I'd love to hear them :-)
Richard Banks
Do you want help with agility, architecure, devops, or team practices?
Get in touch via LinkedIn or Twitter and talk to Richard today.